If someone put a gun to my head and asked what the three great loves of my life are, I’d probably… well, crap my pants.

If the assailant continued to stick around even after that, then I’d probably say something like:

Today I’m speaking to that last object of my desire. Specifically, to a February 15 GA Voice op-ed piece titled “Cars Aren’t The Problem With Share the Road,” by Melissa Carter. As it were, this single editorial has quickly become to the Atlanta cycling community what a Paula Dean cookbook is to a vegan food festival. 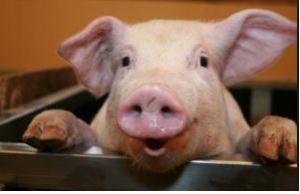 I won’t lie. When I first read the piece, my initial thoughts were not exactly — how shall I say — ladylike. I heart Bikes. I wear my “I WANT HPV” t-shirt with pride (HPV as in Human Powered Vehicle, not herpes). I’m an avid rider and yes, in my ideal universe Atlanta Streets Alive — the bi-annual festival in which major city roadways are shut down to automobiles and opened only to foot or bike traffic — would be the norm.

That said, I’m just sane enough to know how unrealistic that is. After moving to Atlanta, I even bought a car after seven years of being a two-wheeled purist. And I’ll be the first to admit how grateful I am to have said car around should the need arise.

But as much I’d like to print Melissa Carter’s face on a “WANTED” spoke card, she’s not all wrong. She’s just really short-sighted, never more so than in her opening paragraph. There, Carter suggests every traffic jam she’s ever been stuck in “was caused by a bicycle.”

If you can get past that doozy without gagging, Carter does go on to make some valid points. Chief among them:

A “4,000 pound vehicle that can reach speeds well over 100 mph” is not meant to “coexist on the same roads in harmony” with a 30 pound bicycle with an average speed of 20 mph.

I could not agree more. When it was created in 2000, Share the Road was designed to educate “all road users [including pedestrians, bicyclists, motorcyclists, etc…] about interacting safely in and around large trucks and buses.” (sharetheroadsafely.org). That didn’t mean adding bicycle hand signals to the driver’s Ed curriculum and calling it a day. Obviously infrastructure has to be implemented that creates clear and generous divisions between the two. To say Georgia lacks in that area is a gross understatement.

On the majority of metro Atlanta streets, a bike “lane” is qualified by a white stencil drawing of a helmeted stick figure on two wheels visible right before driving your car over it. Last check, Georgia ranked 23rd in the nation for being bike friendly (League of American Bicyclists). 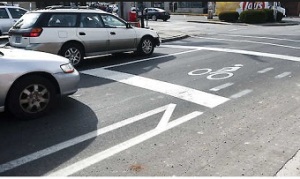 But nowhere in her article does Carter suggest ways of improving said infrastructure. Rather than being constructive, Carter is openly cynical: The system is flawed and therefore should not exist. That she places no blame whatsoever on the part of cars for the Share the Road debacle is inconceivable. Instead, she holds the “arrogant” cyclist who “flippantly” disobeys traffic laws responsible for sabotaging any real STR potentiality.

Dear Melissa Carter, for every self-righteous cyclist that leans up against your car or whizzes past you in the turn lane — I will raise you two SUV-driving jacktards who intentionally try and run biking-me off the road to compensate for their gherkin-sized genitalia. 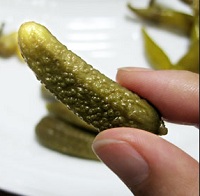 Given that she sees bicyclists as the weak link in the STR chain, Carter’s proposed solution is — unsurprisingly — to hold the pedaling population more accountable for their actions. She writes:

“I want everyone who wants to put their bikes on the main road to get a license and a tag. That certainly isn’t a new idea. A similar effort took place last year in Oregon when a proposed ballot measure sought to create a bicycle education program for people who have not taken the Oregon driver’s test. It would also mandate more police enforcement of traffic laws for cyclists… The measure would have required a fee for the endorsement test and registration via a license plate for all bicycles in Oregon.”

I have one word: Portland. If Georgia was anywhere near the stratosphere of Portland in terms of accommodating a safe and amenable car/bike coexistence, then I would be first in line to apply for my bicycle license. As it were, it’s like comparing RadioShack to the Apple store. Georgia is bike-phobia; Portland is bike-phoria.

Carter wants bicyclists to get licensed to codify their understanding of traffic laws and hold them accountable for breaking those laws. She fails to acknowledge the other obvious benefit here: The fee for said licenses could go directly into building a solid bike-friendly infrastructure in Georgia.

Once again, Carter is unable to see any way of improving the situation. “I don’t believe in sharing the road,” she yields. I imagine little girl she also had issues sharing her toys with other kids on the playground too.

Instead, Carter is resigned to the cluster-muck that is GA’s Share the Road; and the best she can hope for is that the bicyclist holding her up in “stand still traffic” has a valid license plate.

I am way more optimistic. While it’s still in its rubbing two sticks together stages of creating a bike-friendly culture, Georgia is light years from where it was ten, twenty years ago. When I was growing up near Atlanta in the late 90s, the only reason you’d see someone on a bike was if their driver’s license was revoked.

Now, we have “road diet” programs and the Beltline. And the most recent coup: At the beginning of this year, Mayor Kasim Reed and the Atlanta City Council approved a $2.47 million overhaul of Georgia’s streets to create “high-quality” bicycle projects, including:

In the meantime, viva la velocipedes.