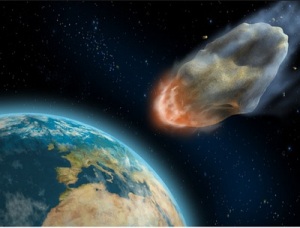 I know. I KNOW. All across the planet, people are clinging to the last, rapidly fraying shreds of sustenance and sanity. Bombs are falling on orphanages, asteroids are hurtling toward earth, ice caps are melting, fault planes are splitting, starvation and prejudice and inequality are persisting while whole species of animals are being wiped out…

… SO That the Very Last Thing the world needs is more airtime devoted to Angelina Jolie’s preventative double mastectomy.

I understand that being a movie star is NOT synonymous with moral superiority.

I don’t need to read gossip rags for it to sink in that OMG! famous people are actually “JUST LIKE US.” They get parking tickets and step in gum and despite all the influence and money in the world, fall victim to life-threatening diseases.

Except unlike us, they have no privacy. Ergo in some bizarro fun-house mirror surreality I know the most intensely personal details of someone whom I have never, and will likely never, meet. Yes, it’s creepy and twisted but it’s true. So I may as well use Angelina Jolie as a proxy for every carpool driving non-famous woman who took the exact same measures but managed NOT to land on the cover of People magazine to be extolled a hero among mortals.

But let’s face it — what Joliethesewomen did/do is fucking heroic. Seriously, Gawd forbid you find out your most psychologically defining female body parts and reproductive organs are IED’s with an 87% chance of exploding…

Who among us would go all Tomb Raider on said nemesis? 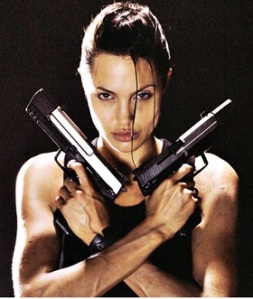 I  for one would probably run away screaming like a lost, cookie-selling girl scout happening upon a fat camp. But…

That’s kinda sorta because when I think of cancer, I don’t think of fighting chances and preventative surgeries.

I think of what happens after you’ve already been diagnosed.

I don’t think of being a PREVIVOR.

I think about making the best of the time you have left.

I don’t think of Angelina Joliethesewomen who I have never, and will likely never, meet.

I think of my own mother, who lost her battle with Leukemia when she was 49 years young.

On one random winter morning, a tired oncologist walked into the hospital room where my mother waited to be discharged after a weeklong stay to treat a severe case of pneumonia. The door slowly closed behind him.

I often wonder what went on behind that door, what my mother’s initial reaction to the doctor’s diagnosis was. I wonder whether my father held her hand, if she held her breath, if the doctor held his head low to wait for the allotted time to pass for his patient to digest the information she had just received: that the pathologists had detected an abnormality in her blood tests; that the abnormality was Cancer; that without finding a bone marrow donor and undergoing a successful transplant and/or chemotherapy, she would have one to three years maximum left of her life.

How much time do you give a person to wrap their brains around words with such a ceaseless circumference? A New York minute? Enough to pop a family-sized bag of microwavable popcorn? The same half-hour you allot before jumping back into the pool after eating so as to avoid drowning?

My mother waited as long as possible to tell me, her youngest. I was twelve. I was a knobby kneed, tousled, tangled tomboy who picked scabs, noses and toes with an unmatched vulgarity that revolted even my older brother. Think Pigpen. 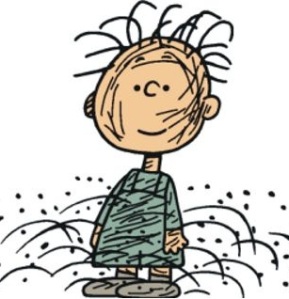 The day, I was sitting at the kitchen counter, tilting a jar of maple syrup on its side and painstakingly filling each individual square on my Eggo waffle. My mother walked over and sat on the stool beside me. She asked if we could talk for a minute and something about the unnatural high-pitched shrill of her voice broke my concentration. I angled the jar too far. Syrup spilled over the brim of the square, drowning the whole perfect waffle grid beneath.

Put out, I dramatically swiveled to face her.

She grabbed my hands and held them in her lap. She inhaled deeply, as if she were about to hold her breath under water. And then, a single ribbon of words left her lips and floated overhead: “Chemotherapy,”  “Bone-marrow transplant,”  “Platelet Count,” “Life expectancy,” and on until finally she came to a name that set off an alarm of recognition wired deep down inside me, in a place reserved solely for the cause of sheer and total panic: “Cancer.”

I didn’t know the textbook definition or the clinical details. I knew Cancer was a scaly, saber-toothed, Cyclopes/T-Rex interbred monster that lurked behind dimly lit, flickering street lamps in the dark night, tearing apart the flesh of alley cats as appetizers until the main course — an unsuspecting human with a family, patio furniture, and refrigerator artwork — passed by. I could feel him there, in the room with us, filing his claws on the razor sharp ends of his fangs, skulking, waiting for the moment she let her guard down.

I sized them up. It — versus — Her. She in one corner, 5 foot 6, 120 pounds, wearing a silk, shoulder-padded blouse and floor-length skirt. Her porcelain skin, delicate hands, lean long fingers, French-manicured nails, cherry red lipstick always smudged on her two front teeth. 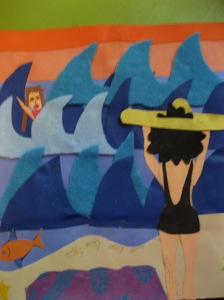 My mother did not seem built for battle. She snuck frozen bonbons in the pockets of her bathrobe before turning off the kitchen lights at night, all the while waiting for her cucumber face mask to harden. She smelled of suntan lotion and lemon juice all year long. She ate pizza with a fork and knife, hung doilies from every doorknob in our house, and sprinkled potpourri on our pillowcases. She loved Neil Diamond and Dynasty, central air-conditioning, and the cool salty breeze that snaked across the Atlantic shoreline, on which she could be found every summer lounging under a giant beach umbrella wearing a straw hat with a brim as wide as an inner tube, and black tinted sunglasses that took up half of her face.

Every hour or so, she would walk down to the water, pressing one hand on the top of her head to hold down her hat as the sides flapped furiously in the wind, and waving out to me and my brother with the other. Cautiously, she would edge further and further in, pausing to let the waves crash against her shins and settle into the shore. From where I waded, she looked like an exotic sea bird with iridescent white plumes sprouting forth from a small black body, a brown crown, and red beak, combing the coast for crabs and beached jelly fish.

And in the other corner — IT. Heightless, weightless, widthless. Everywhere and everything at once. All caustic, blistering breath.

The odds were against her. I knew that, even as she promised otherwise, even as she swore to come out of this fight stylishly windswept, strutting in a pair of pumps lined with the taut skin of the vanquished beast…

Three years later, I came home from school and found my father and brother sitting at the kitchen counter with their heads bowed low as if pinned beneath invisible guillotines. I thought what a curious thing to be happening in the middle of the afternoon on a week day while the lawn man was kneeling on his dirt-soaked knees yanking out weeds in our backyard, while the cat yawned, while the bread in the breadbasket gathered mold, while the washing machine churned our whites around.

And then I looked up to my parent’s bedroom where my mother chose to spend her final months. I could tell it was empty in a way that only vacant hospital rooms with the beds turned up can be. At that moment, I understood that she was gone. The beast had won.

The fact is — there is nothing redemptive or enlightening about being a kid — heck, being any age — and having your mom get taken away forever. It’s not character building; it doesn’t make you deeper. As a pre-pubescent girl, processing the loss is about as possible as balancing a boulder on a drink straw. It’s a wrecking ball through innocence, an irreversible change to your molecular composition in ways you’ll never fully understand.

That Angelina Jolie — on behalf of every man and woman who has taken/will take the same preventive measures to stand up to the beast and say “Hey Cancer, Go F Yourself,” — mad bad mother fucking props to you (s).

My mom and I