Before I get started, I just want to take a nanosecond to thank those readers who sent me “Happy Birthday” greetings over the weekend. While I’d love to say you’re all created equal in my eyes, who are we kidding? THREE people in particular left all of you choking in the dust with these holy superior grand gestures:

1. An anonymous admirer in Bangladesh who composed this haiku for me:

I am a Sherpa

I want to carry your bags

Up a mountain high

** Who knew you could even get Wi-Fi in a yurt.

2 & 3: My faithful readers Jill and Steve who literally made several of my Wish-Tree wishes come true with these wicked to the awesome, heart-melting cards:

And now — Step away from the ledge, put down the rubber-dart gun, and slowly walk your eyes to the center of the page:

After a brief delay, Mailbag Monday is here.

About 3 months ago, my boyfriend of over a year broke up with me for a perky, 24-year old au pair/Pilates instructor at his gym. Now that the shock has worn off and the Xanax prescription has run out, I can’t help but think: The longer I — a single woman in her late 30’s — stay out of the game, the harder it’s going to be to even make it on the field. So, my question to you is: How long do you think I should wait to start dating again?

Hot damn if there isn’t this Lifetime television-bred

notion that the only available men out there for single women over the age of 30 have secret cyber lives, stolen identities, or are haunted by their dead ex-girlfriends.

Sure, our ego-maniacal culture views an attractive woman in her 40’s as some scientific

anomaly that should be studied like an albino peacock  — WHILE men over 40 just grow more dignified, dapper, and datable cuz they’ve finally figured out the G-spot is nowhere near where Richard Gere’s rumored gerbil caught some shuteye.

Yes — statistically speaking, the older we get the pool of viable prospects dries up faster than a Wall Street bank’s paper trail. But those are all numbers. And you, dear “Benched” are more than a number. When the time is right, and you’re really READY to re-enter the dating pool, there are tons of things you can do to give yourself a leg up on the competition. Off the cuff:

In other words: Don’t Rush Yourself. Just because it’s over between you and your ex, doesn’t mean you’re OVER it. And I for one think it’s best to follow the TSA luggage regulations when entering a new relationship: i.e.

You can only take one, carry-on item on the plane, so make it a doozy.

The question then becomes: WHEN will you REALLY be ready to move on?

Theory 1: It takes half the time you were in the relationship to start seriously dating again. Reality: I’ve known women who are like lizards after a bad break-up. Their tail gets lopped off, only to grow back fresh and new in nothing flat.

Me personally — I tend to be more like Massive Head Wound Harry: showing up to fancy cocktail parties long after the break-up, horrifying guests as the pet dog gnaws at my dangling, left skull-flap.

Theory 2: Intensive Shock Therapoo-tang: In order to get over your ex, you must do the horizontal bop with a total stranger.

Again — been there, tried that. I ended up on some random dude’s futon in a basement apartment, eating fried Fruit Loops as he played me a CD of his Emo-punk band “Batteries for Frogger.” Only lyric I remember:

“I gave you my heart and you gave me human papilloma.”

In truth, there is no one-size-fits-all comeback cure. But that didn’t stop me from creating my very own “Are You Really Over Him?” TEST.

(Answers are graded on a point scale. Circle the number that best reflects your true experience:)

1. You have spent the last 5 weekends watching:

9. You find yourself listening to:

10. After downing 4 Kamikaze shots, you:

Time to tally up your points: 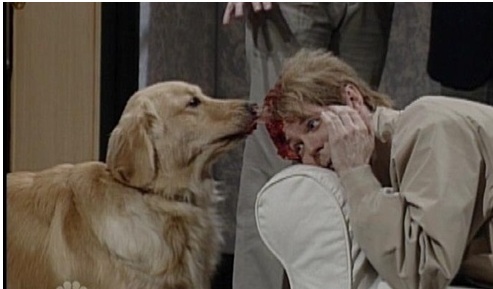 You got some serious healing left to do.