Hello my fine-feathered frangipanes and welcome to Mailbag Monday. Today’s episode hits rather close to home — soo much so I had to take a few steps back and ask myself: Can I honestly check my ego at the door and keep true to the code of journalistic objectivity?

Final answer: Not a shot in hell! So, on your mark, get set, and Go-Go-Gadget extreme personal bias —

What the F is up with single women and cats? I’ve heard of conscription. But is there an unwritten catscription that says any unmarried woman over the age of 26 must adopt a feline and name it something corny like Dumbledorable or Miss Kitty Fantastico?

Seriously — did I miss the memo? Can cats cure cancer or regenerate the ozone layer, because from where I’m sitting, their entire lives consist of eating, sleeping, shitting, and walking all over their delusional lovestruck owners.

You do realize of course that asking ME (see Poppycock’s Corner) to defend your dig on single-women-and-cats is like asking a homeless person to break a $20. But I can tell you are genuinely befuddled. And so I feel it my duty to at least try and show you another side of the story.

First of all, we don’t “name” our cats. The day we bring them home, we toss them a ball of yarn for which they use to spell out their human handles in string.

As for, “What the F is up with single women and cats?” — I don’t know. What the F is up with hippies and hula hoops; with nouveau douchers and spirit guides; with Nick Nolte and Hawaiian shirts; with hard-core runners and toe shoes; with Eddie Murphy and soul patches; with hipsters and triglycerides; with mandudes and Axe body spray; with dude-itarians and X-box; with ALL dudes in general everywhere and LOAD SOCKS????

The fact is — most of us who haven’t yet achieved a Bruddha-like state of non-attachment — tend to look outward to fill that which is missing within.

And of all attachments out there, the furry felid has always been a world-class resistance-buster. Since the beginning of ever, cats have been exalted for their mystic powers; they were revered by the Egyptian pharaohs, and story has it — the Prophet Muhammad adored his cat Muezza show much, he cut off his own sleeve rather than wake him from sleeping on his arm.

Practically speaking, cats keep our feet and ears warm. They eat roaches and spiders. And in some cases, they even kill demonic, sword-wielding pixie trolls that try and hold our noses when we sleep: 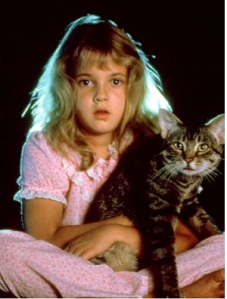 Sure, Sourpuss. I will be the first to admit:  Kitty love can very easily take a sharp turn from laser stick to broomstick. One of my all-time favorite comedians Demetri Martin designed this hilarious line-chart below that illustrates how — at some point — a girl’s cuteness is futile against the time she talks about her cat. 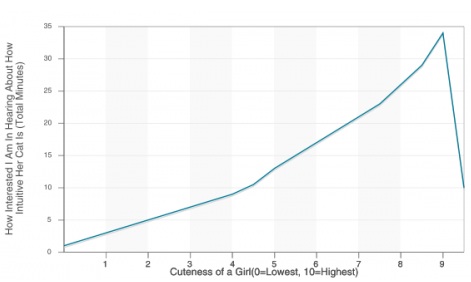 But make no mistake. All ladies who are “crazy” about their cat(s) are NOT Crazy Cat Ladies — categories A and B respectively. There is a very clear fe-LINE between the TWO. And never shall the twain meet.

B: Lost count 2 years ago

A: Wears cute Etsy-bought shirts with the occasional, cat-screen-printed graphic.

B: Wears a terry-cloth bathrobe and gardening Crocs

A: Hair is done-up in a neat bob or sweet do
B: Hair is matted and knotted from constant paw kneading

A: Cat sleeps on the bed with her at night
B: Cats sleep on the bed while she sleeps on a waterproof mattress pad on the kitchen floor

B: Regularly coughs up a hairball

A: While kissing, she might try and love-bite your upper lip
B: She doesn’t kiss. She shows affection by nudging your nose with her nose

A: She maintains personal hygiene with regular baths and showers
B: She avoids all high-water-pressure scenarios as they scare the kitties

A: While driving to the vet, she places cat in travel-carrier on the seat next to her
B: Her license was suspended after a string of 911 calls reporting a blue sedan swerving down the highway with several cats walking across the dashboard.

A: Sees a stray cat family with a new litter of kittens on the street — Calls a kill-free animal shelter to pick them up
B: Lures kittens away from their mom with cans of tuna fish to add to her brood

A: Cradles her friend’s newborn baby boy and rocks him to sleep
B: Tries to hold her friends newborn by the nape of his neck

A: Takes a spot of cream with her morning coffee
B: Drinks 5 glasses of warm milk a day

A: At the beach — She tinkles in the ocean
B: At beach — She pees on the shore and kicks a fresh pile of sand over the spot to cover it

A: She sees one rat in her house and immediately calls pest control
B: She intentionally goes to the pet stores and buys out the snake-feed rats to keep her cats happy